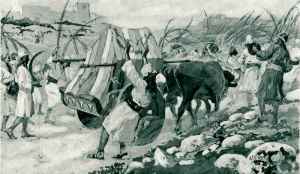 The Chastisement of Uzzah

In the last post we learned that David was afraid after Uzzah was killed. The presence of God had not been paid the proper respect. If we think this is a tad arrogant of God, there are things we need to learn.

Though the procession began as a joyous celebration, Jerusalem was not ready. Though David perceived he was doing a great thing, he was not ready. There remained far too much irreverence and dishonor of God, as characterized in part by the practical insolence of Uzzah, regardless of his intentions. One may dishonor the Lord all day long without immediate recompense, but barring repentance, the tables will turn. Payment will be made. A person will eventually reap some really bad stuff. Those who cloak themselves with a bullet-proof attitude, especially a religious one, will one day learn they have no armor at all.

He was a Philistine, a convert from Gath, the same city as the slain giant Goliath. [2]

What’s up with that? Where were the descendants of Levi? Where were those natural descendants entrusted with the duties of caring for and bearing the Ark of God? There is even doubt that Abinadab was a true Levite. Like so many Christians and ministers in America today, were they off somewhere padding their own nest, raising their own stature, and completely dishonoring God in the process? Institutional American Christianity has largely gone off the deep end, as characterized in this Old Testament account. Wherever the powerful, loving, and glorified presence of the Lord Jesus dwells, real believers know it. Dead churches have no clue.

The Lord would spend 90 days with a Philistine who apparently reverenced Him more than anyone else in all of Israel. The meaning of his name gives a perfect clue. Obed means “servant,” or “worshipper.” Despite his lack of pedigree, he was a true servant and worshipper of YHWH. Notice that the Lord not only allowed His Ark to dwell in the house of Obed-edom, the man was blessed. Because of this converted Gentile Philistine, Jerusalem was allowed 90 days to get its act together, and instead of an end to the celebratory procession, it was merely put on hold.

At present, God is still waiting for us to get our act together. He is waiting for a full expression of honor toward Him. Traditional American Christianity may have credentialed clergy, many schools and seminaries, about a million church buildings (some incredibly state of the art), television studios, stations, and networks, a powerful radio presence, hundreds of billions of dollars in net worth, and the vast majority who profess Christianity. But all we do has made little difference in the overall scheme of things. The only hope for America is the Lord Jesus. Because we still lack the desired presence of God, it proves our collective irreverence and lack of respect for Him. We are content without Him in His full strength and power. This proves an absence of general servanthood and proper worship.

[2] It is possible that Obed-edom hailed from Gath-rimmon, a Levitical city, yet there are ten references in the OT to the word Gittite. Three of them refer to Obed-edom. The other seven all refer to Philistine inhabitants of Gath. Also, this name is interpreted to mean “servant of Edom (Esau),” not likely the name a Levite (descendant of Jacob) would give his son. The name Gath means “winepress.” Edom means “red.” These are apparent references to repentance and sacrifice (blood), and the three months as a time of repentance and getting right with God.

Posted on May 31, 2011, in Teaching and tagged Ark of the Covenant, Gittite, Great Awakening, King David, Lord Jesus, Obed-edom, Real Christianity, Reverence for God, The Presence of God, Uzzah. Bookmark the permalink. 5 Comments.