Ron Paul, Follower of Our Lord Jesus—For Such A Time As This 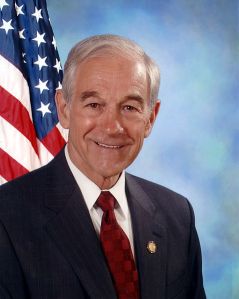 The media has always painted Ron Paul as a candidate with no chance of winning and Americans in general have believed the false reports. The prejudice is obvious. When one seriously considers all the presidential candidates with respect to godly values and respect for the Constitution of the United States, he is the only candidate that will right the course of the country.

Regardless of who is elected a year from now, America is set to continue going through very tough times as a nation. Our current course is simply unsustainable. The money men and politicians for the most part no longer care whatsoever about the country but only themselves. The power elite exist in a vacuum untouched by the reality most Americans face. They continue to feather their nests, bankrupt the country, and rob our children’s future.

If any candidate other than Ron Paul is elected, I guarantee you it will be the same old same old. We must look past the outer media image of every candidate to see what they really are. Ron Paul has been consistent in his beliefs and statements for many decades.

In case you are wondering, Scripture is very clear that the Lord definitely takes sides and chooses whom He will for his purposes. He always fights on the side of freedom. He suffered the worst punishment any man has ever suffered, became sin on our behalf, and defeated death for the purpose of granting us abundant life and freedom from sin and bondage. He continues to fight a worldwide spiritual war for the sake of our liberty.

Our founding fathers were very clear on what they were fighting for during the Revolutionary War. Our forebears won our freedom. Since then, many very evil people have decimated the glory that was once America. At this point in history, we can choose to quit, to give up, to surrender all in thinking it is too late, or we can fight, against the odds, and restore the liberty, unity, and abundance this country once possessed. Voting for yet another elite politician who says one thing and does another will not get the job done. Has the last several years taught us anything at all?

The following is Ron Paul’s personal statement regarding his faith and loyalty toward our Lord Jesus Christ. Please read it and consider the truth.

“I have accepted Jesus Christ as my personal Savior, and I endeavor every day to follow Him in all I do and in every position I advocate.”

My faith is a deeply private issue to me, and I don’t speak on it in great detail during my speeches because I want to avoid any appearance of exploiting it for political gain. Let me be very clear here: I have accepted Jesus Christ as my personal Savior, and I endeavor every day to follow Him in all I do and in every position I advocate.

It is God Who gave us life. As He is free, so are those He created in His image. Our rights to life and liberty are inalienable.

I’m running for President of the United States because I believe that our traditions and way of life are under attack from an out-of-control federal government and reckless politicians who show no regard for what our Founders entrusted to our protection.

America became the greatest nation in human history because a dedicated band of Patriots believed their God-given rights were worth fighting for, even if it meant challenging the world’s most powerful nation in what many deemed a “hopeless” cause.

Being free meant so much to our forefathers that they put everything on the line – and thousands sacrificed their lives – to give the promise of liberty to not only their children and grandchildren, but to generations they knew they would never even meet.

Their courage and determination guaranteed they would defy the odds and achieve victory.

In this critical election, you and I must decide if the principles of limited government and personal freedom are worth fighting for once again.

Since I’m asking for your vote and your trust to lead this nation, let me tell you a little bit about my background and beliefs.

My parents raised my four brothers and me on a dairy near Pittsburgh, Pennsylvania, where they set clear examples for each of us about faith, honest living, and individual responsibility. Their Christian values helped inspire two of my brothers to eventually enter the ministry, and provided me with the foundation I needed to practice medicine and one day become a U.S. Representative.

In addition to my time in Congress, I am proud to have delivered over 4,000 babies as a country doctor in Texas. As I trained to practice medicine, I became convinced without a doubt that life begins at the moment of conception. I never performed an abortion, and I never once found an abortion necessary to save the life of the mother. In fact, I successfully helped women struggling with their pregnancies to seek other options, including adoption.

I am running to Restore America Now, and by that I mean that it’s time to protect and promote the basic God-given rights inherent in the promise of America.

We must pass on our heritage of liberty to the next generation – not tens of trillions of dollars in debt and liabilities.

We must stand for life – not allow millions of innocent children to continue to be slaughtered with the government’s approval.

We must follow the Biblical mandate of using honest weights and measures – not printing money out of thin air in almost complete secrecy and then handing it over to oppressive dictators.

We must only send our men and women to fight for our country when the mission is clear, every necessary tool needed to win is provided, and we respect the Constitution by declaring war.

Once war is declared, it must be waged according to Just War principles. We should only fight when it’s in our national security interest, and we should no longer do the corrupt United Nation’s bidding by policing the world.

In Congress, I never vote for any piece of legislation that violates the Constitution’s strict limits on government power. I also do not participate in the congressional pension system.

As President, I give you my word that I will only exercise my authority within the confines of the Constitution, and I will work every day to rein in a runaway federal government by binding it with the chains of that document.

For my stands and beliefs, I am told that my efforts are “hopeless.” Like those who were proud to stand up for what they knew was right to create our nation, however, I firmly believe that now is a better time than ever before to reclaim our liberties. No situation is hopeless for those who receive their strength from their faith, family, and freedom.

And like those Patriots, I have no doubt that liberty will prevail.

I invite you to join me and millions of other Americans in taking our stand to honor our forefathers’ sacrifices and Restore America Now.