IRAN IN THE CROSSHAIRS! (Part 1) 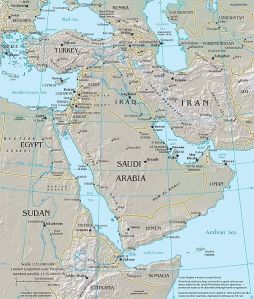 February 2, 2012: Israel says the West has the ability to make a successful military strike on all of Iran’s nuclear facilities, though the Pentagon claims we do not have conventional weapons strong enough to do the job.

“The West has the ability to strike, but as long as Iran isn’t convinced that there’s a determination to follow through with it, they’ll continue with their manipulations,” said Vice Prime Minister, Strategic Affairs Minister, and former IDF chief Moshe Ya’alon. “The Iranians believe that a determination isn’t still there, both in regards to military action and in regards to sanctions,” and that “any facility protected by humans can be infiltrated by humans. It’s possible to strike all Iran’s facilities, and I say that out of my experience as IDF chief of staff.”

This contradicts a Wall Street Journal report last week in which Secretary of Defense Leon Panetta was quoted as saying the United States does not have a bunker buster bomb big enough to penetrate and destroy the underground Iranian facilities where suspected nuclear programs are in the works. “We’re still trying to develop them,” said Panetta.

Who is actually driving US foreign policy in the Middle East?

The following series is an attempt to set the record straight, reveal less-known information, and expose the truth regarding the current crisis regarding the United States and the nation of Iran. There is an ongoing globalist agenda covered up by a false agenda. America has been hoodwinked regarding its foreign policy in the Middle East.

Critics of presidential candidate Ron Paul, for example, who might like him otherwise, usually cite his foreign policy views as the reason they choose not to support him. His views, however mischaracterized and in the minority they may seem to be, are generally the correct ones. They are based on the vision and wisdom of our founding fathers and Constitution of the United States. It must be noted that members of our active duty military support Ron Paul more than any other announced 2012 presidential candidate. What do they know that most Americans don’t know?

It should be shocking that our national creed is treated with such indifference and lack of respect, especially by our duly elected representatives, but Americans have become too apathetic to be rightfully concerned. We are motivated more by fear of perceived enemies than honor of the law of the land. Military strength means we must always be strongly prepared, but never against our rights as American citizens or disrespect of the law. Spreading ourselves too thin has actually weakened us, and has taken us down the road of all empires: Continual expansion means eventual inability to maintain control. Contraction has always been the inevitable outcome of all historical empires.

The dominant foreign policy of America that most people continue to support is one of aggression, war, incredible spending, nation-building, and most of all, the unbridled and ongoing expansion of the American Global Military Empire. It is geographic in that we have military personnel stationed in over 150 countries of the world, which accounts for almost 80% of the nations on the planet. Total US military bases on foreign soil total approximately 750. According to anyone’s definition, this is a massive presence which clearly denotes empire, and it is the maintenance of this empire that is actually subverting our military strength.

And the United States can no longer afford it. Our national debt is currently 15.3 TRILLION dollars. It is rising exponentially. Our foreign wars have assisted in bankrupting the country. We don’t have the money. The money we do have is mere paper with no backing, and is becoming worth less by the minute through rising inflation since we keep the printing presses humming. The currency itself is also becoming devalued but retains relative strength due mainly to our wildly out of balance trade deficit. We are buying many more foreign goods than others are buying from us and this is keeping the dollar in decent shape, though the world cannot do as much with the dollars they possess. The Federal Reserve has set interest rates at the bottom for the foreseeable future, below the rate of inflation of course, in part to make the dollar attractive to foreign investors. But this is done at the expense of our own recovery and is only putting off the inevitable collapse of the US economy. The Dollar Index has lost 3.5% in the last two weeks since its highs in mid-January and war pressure is ratcheting up to stop the slide.

There is currently a war on between the dollar and the euro. Many countries are making a move to alternative currencies. The prospective war in Iran is actually about (1) the petrodollar-euro war, (2) the Russia-China-Iran economic oil alliance, which also includes India and Pakistan, and (3) the move by the US to gain the strategic and geographical high ground by securing Iran once again as a national ally and bring the nation under the full control of the West.

There is no doubt that the Iranian government has been hostile to the US ever since the 1979 Iranian revolution that ousted the Shah, when an independent Islamic Republic was formed. But their hostility began when we overthrew their government in a 1953 coup and set up the Shah as our own guy in charge. Iran has always been coveted not only due to its location and vast resources, but currently because it represents the last puzzle piece toward dominance in the region.

This is what the long-term Iraq and Afghanistan wars are actually about, in that they served as opening salvos and precursors to eventual regional hegemony. Iraq became our ally after we lost Iran. These two countries fought an eight year proxy war to a stalemate in the 1980’s. The breaking point with Iraq came when Saddam Hussein attacked Kuwait. The 1991 war against him was a lesson he failed to learn. Some thought he should have been removed at that time.

A decade later Saddam defied the United States by switching from American petrodollars to the euro in November of 2000. This was the largely unknown watershed moment when the decision was made to take him out.