← Keep Your Lamp Filled With Oil
What is a Real Christian? →

10 or 2? The Greatest Commandments and You 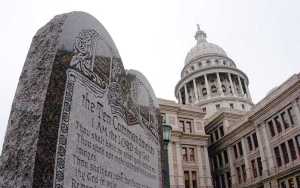 Some American Christians are metaphorically up in arms over a curious issue. Representations of the Ten Commandments have been removed from public places, court houses, etc, and removal of these icons is threatened elsewhere. A great fight has ensued with either side casting the other in a not too pleasant light.

On one end of the spectrum, secularists claim the Ten Commandments is an ancient outdated list of dos and don’ts that has no place in a country in which church is divided from state. Christians counter that the nation was founded on the Ten Commandments and that our entire system of jurisprudence is based upon them. The latter consider the disagreement as an attack against the Christian moral code by anti-Christian government-first authoritative bigheads, atheists, statists, and secular humanists. Those against the posting of the TC consider its supporters as backwoods half-brained ninnies living in the past.

Both parties might step back from the fight for a while to consider what the New Testament actually says. While the Ten Commandments have indeed been foundational in Christian circles, it is only because Christians have stopped at a place in their development and did not apply the actual teachings of Jesus:

“Do not think that I came to abolish the Law or the Prophets; I did not come to abolish but to fulfill. For truly I say to you, until heaven and earth pass away, not the smallest letter or stroke shall pass from the Law until all is accomplished. Whoever then annuls one of the least of these commandments, and teaches others to do the same, shall be called least in the kingdom of heaven; but whoever keeps and teaches them, he shall be called great in the kingdom of heaven. For I say to you that unless your righteousness surpasses that of the scribes and Pharisees, you will not enter the kingdom of heaven.” [Matthew 5:17-20]

Well, this statement certainly seems to support the traditional keeping of the Ten Commandments. For the record, though, the Lord is actually referring to the entire Torah, which is composed of 613 commandments. However, as did the Pharisees, so do many Christians. There is a higher mandatory standard that many in both camps fail to keep which keeps them out of the kingdom. That’s why the Lord continued His teaching on the subject by adding caveats:

“You have heard that it was said, ‘YOU SHALL NOT COMMIT ADULTERY’; but I say to you that everyone who looks at a woman with lust for her has already committed adultery with her in his heart.” [Matthew 5:27-28]

“It was said, ‘WHOEVER SENDS HIS WIFE AWAY, LET HIM GIVE HER A CERTIFICATE OF DIVORCE’; but I say to you that everyone who divorces his wife, except for the reason of unchastity, makes her commit adultery; and whoever marries a divorced woman commits adultery.” [Matthew 5:31-32]

“Again, you have heard that the ancients were told, ‘YOU SHALL NOT MAKE FALSE VOWS, BUT SHALL FULFILL YOUR VOWS TO THE LORD.’ But I say to you, make no oath at all…” [Matthew 5:33-34]

“You have heard that it was said, ‘AN EYE FOR AN EYE, AND A TOOTH FOR A TOOTH.’ But I say to you, do not resist an evil person; but whoever slaps you on your right cheek, turn the other to him also.” [Matthew 5:38-39]

“You have heard that it was said, ‘YOU SHALL LOVE YOUR NEIGHBOR and hate your enemy.’ But I say to you, love your enemies and pray for those who persecute you, so that you may be sons of your Father who is in heaven…” [Matthew 5:43-45]

Only two of the preceding six statements refer to one of the Ten Commandments. The point here is that there is much more than the mere celebrated ten that so many people are willing to fight about. To add to the above caveat list wherein the Lord makes the proper amendments, we also have an even more curious teaching on the opposite end. Whereas the Lord got into fine detail regarding what the Torah actually states, He also pares down all of that detail into a prima facie foundation with reference to not only the Law of Moses but His own voluminous teachings:

Jesus said the remaining 611 commandments of the Torah and the entirety of all prophetic writings are suspended from the strong upper framework of the two greatest commandments of all. And guess what?

Only one of the two greatest commandments is listed among the Ten Commandments.

There is obviously then, much misunderstanding and misapplication of the Ten Commandments themselves and the true teaching regarding them. Can anyone find a single quote by the Lord Jesus in reference to the ten? How about among the apostles? The fact of the matter is that the Ten Commandments are not mentioned one time in the entire New Testament. Not even once.

This means there was a different standard among the early believers than is among most of us. It means their Christianity was a completely different Christianity. They were not hung up on lists and they did not give but partial commitment. They knew that if they properly obeyed the two greatest commandments, they would also be fulfilling all the rest of the applicable commandments that had not already been fulfilled.

In addition, the early believers knew that wearing one’s religion upon one’s proverbial sleeve was anathema to real Christianity, and that obeying the commandments did not mean posting a select few on the walls of buildings and the institutions of man, but on our hearts.

We are the building. We are the wall. We are the medium the Lord has chosen to advertise Himself to the world.

You are our letter, written in our hearts, known and read by all men; being manifested that you are a letter of Christ, cared for by us, written not with ink but with the Spirit of the living God, not on tablets of stone but on tablets of human hearts.

Such confidence we have through Christ toward God. Not that we are adequate in ourselves to consider anything as coming from ourselves, but our adequacy is from God, who also made us adequate as servants of a new covenant, not of the letter but of the Spirit; for the letter kills, but the Spirit gives life.

Therefore having such a hope, we use great boldness in our speech, and are not like Moses, who used to put a veil over his face so that the sons of Israel would not look intently at the end of what was fading away. But their minds were hardened; for until this very day at the reading of the old covenant the same veil remains unlifted, because it is removed in Christ. But to this day whenever Moses is read, a veil lies over their heart; but whenever a person turns to the Lord, the veil is taken away.

Now the Lord is the Spirit, and where the Spirit of the Lord is, there is liberty. But we all, with unveiled face, beholding as in a mirror the glory of the Lord, are being transformed into the same image from glory to glory, just as from the Lord, the Spirit. [2Corinthians 3:2-18]

As stated here, the Holy Spirit is the Spirit of our Lord Jesus whose love has been poured out within our hearts if we have indeed been filled with His Spirit. It is He to whom the greatest commandment is applied. And it is to each other that the second is applied. These two living commandments (not suggestions) make the entire curriculum of the Lord work properly and bring it to life. They are based on love for Him and love for one another.

“If you love Me, you will keep My commandments. I will ask the Father, and He will give you another Helper, that He may be with you forever; that is the Spirit of truth, whom the world cannot receive, because it does not see Him or know Him, but you know Him because He abides with you and will be in you. I will not leave you as orphans; I will come to you.” [John 14:15-18] [1]

Posted on February 18, 2012, in Teaching and tagged If You Love Me You Will Keep My Commandments, Living Epistles, Lord Jesus, Real Christianity, Ten Commandments, The Holy Spirit, The Letter Kills but the Spirit Gives Life, The Lord is the Spirit, Two Commandments, Where The Spirit of the Lord is There is Liberty. Bookmark the permalink. 9 Comments.

← Keep Your Lamp Filled With Oil
What is a Real Christian? →