Sivan 7: The Day Of Pentecost 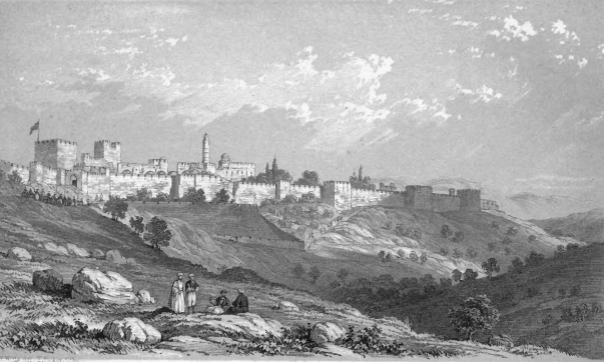 The View of Jerusalem from Mount Zion 1849

The following is an excerpt from Real Christianity, The Nature of the Church:

Why did Jesus create His community of called-out ones in the humble upper room? For starters, He had to have a place off the beaten path, so to speak. It would have to be owned by a disciple or a disciple’s family who was sympathetic to the cause. It could not be a public place, such as the temple complex, but private, to allow for complete unity of spirit and purpose. It had to be a place big enough for 120 people to pray and seek God for about ten days without interruption. In short, it had to be a house. In reality, it was a house.

Though we cannot yet be positively certain, particular statements in Scripture lead one to the strong conclusion that it was located on Mount Zion, Jerusalem’s highest southwestern hill, and that it was probably the house of Mary, the mother of John Mark.[1] If placed on Mount Zion, this house would be located roughly a half mile due southwest of the Temple Mount, approximately five hundred feet south of the present Zion gate. At the time of the Qahal’s creation, however, this house was within Jerusalem proper since the southern wall of the city was located further to the south. Therefore, though Jesus was betrayed, died, was entombed, and rose again outside the city walls, He created the Church inside the city. Not only that, He created the Church in a house.

Why did He create the Church in the city that condemned Him to death? If it had to be within Jerusalem, why didn’t He create the Qahal in a place of high honor, such as the temple? Was it because He was rejected by the ruling hierarchy? Was it because there was no place of high honor for the Lord of all Creation? Or was it because Jesus simply created His community in the most appropriate of all dwelling places, a place which had been foretold in Scripture?

You will bring them and plant them

in the mountain of Your inheritance,

which You have made for Your dwelling,

which Your hands have established.

The LORD shall reign

THE HOUSE OF GOD

From the untold millions which had descended from Abraham by the first century A.D., only the upper-roomers were present when this scripture was fulfilled. Each and every one of these original 120 were Jews. On the birthday of the Lord’s Qahal, Jesus established a sanctuary, a dwelling place on His own mountain—Mount Zion. On this mountain, the 120 were planted, both in the Lord and by the Lord, and functioned as the ovum fertilized by the Holy Spirit which would eventually develop into a body—the body of Christ. Before the sun went down that first day, the original 120 grew by twenty-five times to three thousand—all Jews, all descendants of Abraham, all devout and God-fearing, from every country under heaven to which they had been dispersed. Even though Luke, the author of the book of Acts, doesn’t say so specifically, can there be any doubt that each tribe of Israel was represented in the initial outpouring?

This was the mysterious destiny of the house of Israel—to one day become the actual dwelling place of YHWH!

When Abraham was first called forth and told he would be the progenitor of many people, God had His own future residence in mind. Later, He revealed this truth to Moses, who led God’s people to the land of promise. The house of God would only be a home for the obedient, however, since they would be sharing quarters with God Himself. The structure of the tabernacle of Moses reveals to us The Nature of the Church. The tabernacle was a tent, mobile, following after the Lord as He moved onward into the future. It was filled with His presence. It was where the ark of the covenant was kept. The priests would minister in its midst. Sacrifice was called for. Repentance, baptism, and the infilling of His Spirit were all typed into its construction. It was pliable and moveable, built for eternal purposes.

The tabernacle and all the rites associated with it continued to the time of David. It was then that God revealed to yet another generation the purpose of the tent, and the great revelation of its underlying meaning. After building his own house, David desired to build a house for God. But the Lord would not. God’s plans had not changed, nor would they ever. His eternal purpose was wrapped up in the illustration of the mobile tent. In the future, His dwelling place would be similar—it would be within humanity. [3]

Posted on May 28, 2012, in Real Christianity and tagged Israel, Jerusalem, Lord Jesus, Mount Zion, Real Christianity, The Church, The Day of Pentecost, The House of God, The Infilling of the Holy Spirit, The Qahal, The Upper Room. Bookmark the permalink. 2 Comments.