THE REJECTED BECOME THE CHOSEN: SEPARATIST PILGRIM PIONEERS AND THE JOURNEY TO AMERICA 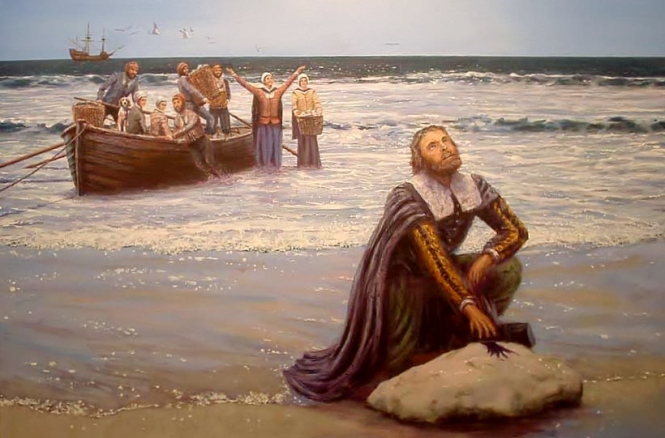 In the 1590s English Separatists and dissenters were finding life in England ever more difficult. Several were sentenced to hanging in an enhanced effort to kill off the movement toward spiritual liberty.

Laws were passed that made exile to the European continent the punishment and death if one ever returned. England would thus stop at nothing to rid itself of unwavering Christian reformers. There was no going back for those who had gone so far with God. Queen Elizabeth was determined to wipe them out and the level of her persecution continued until her death in 1603. She had no heirs and her passing thus ended the generational line of the ultra-dysfunctional Tudor monarchs.

The new king was James Stuart I (1566-1625), the then present king of Scotland under the name of James VI. He had ascended the Scottish throne at a mere thirteen months of age in 1567 when his mother, Mary Queen of Scots (1542-1587), had abdicated. As “King of Great Britain” James I united England, Scotland, and Ireland under his leadership. Though his mother was a loyal Catholic, James was raised as a member of the Protestant Church of Scotland. The developing church was attempting to continue the reform movement began a decade earlier by essentially removing all things Catholic, but James obviously felt more comfortable with those men manning church offices whose ecclesiastical nature lent them to monarchial rule.

Of course, that’s what bishops and ruling prelates are by nature and why such offices were created. The Presbyterians were setting up a national polity in which churches would be administered by the Biblical model of elders and overseers, which simply does not mix with monarchy any more than does oil and water. The comfort level for kings had always involved close trusted ones, be they civil or clergy, and James was thus not prepared to get on board with the movement toward spiritual truth. In becoming king of England he had quickly embraced an anti-Puritan sentiment, which gives one an idea of his treatment of Separatists and other dissenters who continued pushing for reform and refused to conform to non-Biblical tenets. The Puritans still maintained membership in the Church of England and had consequently escaped the larger wrath of Elizabeth, but the heat began rising. Yet, regardless of the new king’s negative attitude toward them, it was their own compromise and apprehensive middle-ground approach that relegated them as unfit for the spiritual frontier. They were not of a mind nor possessed the strength of purpose to be used of God in the necessary major way as those Separatists who had given their all. The Puritans as a group had remained far too connected. They were unqualified as pioneers.

After Elizabeth’s reign of terror, it seemed there remained only one Separatist church community in all of England. Located in the hamlet of Gainsborough, most of its members had fled to Holland two years later. There remained a few holdouts of this group in the town of Scrooby, Nottinghamshire, and it is here the story gets interesting. In Scrooby there lived a man who became postmaster there in 1590. He had attended Cambridge in his youth and later became greatly interested in the new Christian reformation movements. By the early 1600s he had taken under his wing a young man from Austerfield while ministering in the Scrooby area as a reforming Puritan when persecution raised its head once again. A group of perhaps 50 were meeting secretly at Scrooby Manor, having managed to cobble together a small community from the remains at Gainsborough, when the decision was made in 1607 to break ranks completely with the Church of England and establish themselves as Separatists. Thence began the great adventure.

The two men were the postmaster William Brewster (c.1566-1644), who would become a leading Elder at Plymouth Colony, and his young protégé William Bradford (1590-1657), the future Governor thereof. These two were undoubtedly placed together by Providence. Bradford’s father died when he was only a year old and his mother when he was seven. The orphan was forced to live with several relatives in the interim. He met Brewster at the meetings of the Puritan Richard Clifton when only a young man of about twelve and at last found an appropriate father-figure. From this he received a better upbringing and someone to direct his already keen interest in the Reformation movement.

The restrictive spiritual atmosphere in England was such that the young congregation decided they must leave the mother country and sail across the channel to Holland to live according to their convictions. Yet, as another indication of the severe trials and fight to come their way, they were robbed of all their possessions by the officers of the ship they hired and imprisoned for attempting to leave England illegally. They remained undeterred, however, and were able to make their getaway the next year, finding peace and religious toleration in The Netherlands. After a year in Amsterdam amid the bickering of two other congregations, they moved to the city of Leiden, approximately 100 strong, and settled into a peaceable and productive life.

One can see by the trials they faced and tests they passed that God was preparing them for a much greater mission. Others had disqualified themselves for one reason or another, be it a lack of faith, selfish attitudes, inability to work together, or loyal connections to the state church, which prohibited a lack of complete loyalty to God. Those connected, as the Puritans, had not considered their inevitable betrayal through their association with ecclesiastical authority and the throne or the temptation of looking back. We see the same thing in the ancient history of the Jews when God had to remove all Egyptian influence and fleshly nature from His people through their wanderings in the Sinai desert. These Separatist future founders of the American Plymouth Colony had proved their loyalty to God by both their obedience to Him regardless of greatly challenging circumstances, and also their complete separation from the world.

In Leiden, Brewster began publishing books for sale in England and was soon under arrest by English authorities in 1619, who had accused him of the same crime as William Tyndale—printing up non-official religious works that did not toe the mark of the accepted Anglican confession. The Dutch government agreed with England in a political move and confiscated the printing equipment. Brewster was able to escape to England and hide out. It was during this time that plans were made to make the most radical move of all—securing a land patent from the London Virginia Company.

The community as a whole had become very concerned after ten years of relative comfort and security in Leiden that their children, if allowed to grow up and become established there, would lose both their English heritage and Christian beliefs. The Netherlands was a free pluralistic nation by comparison to England, but the resultant freedom also gave place to a more open mindset regarding moral values and sin. It occurred to the group that the time had come yet again when they must move on if they would maintain their walk with God. Their willingness to suffer so many trials for the sake of the real Gospel had undoubtedly impressed the Lord. Due to their relentless attitude toward holy living and walking in God’s new light, rather than fighting against the movement or holding back like almost every other group, they had become the chosen ones to take not only the Gospel to America, but a community form much closer to Scriptural intent.

The 180 ton Dutch cargo vessel Mayflower was hired in London and sailed to Southampton on the southern coast of England in late July of 1620. Most of the Pilgrim community remained in Leiden, Holland and bought a small ship called the Speedwell to take them to Southampton, from which both ships would sail across the Atlantic to Virginia. The second ship proved unworthy of the journey, however, having leaked on the trip across the English Channel, and after repairs, began leaking again at the start of the great voyage. Stopping at Dartmouth, repairs were made a second time. On their second attempt at the Atlantic crossing, as they reached the open ocean after having traveled roughly 300 miles, the Speedwell continued leaking once again and the Pilgrims were forced to return to England. Many of the passengers had become so tired and frustrated they decided to stay home. Here was yet another test of heart and a further winnowing of the passenger list, from about 120 to 102. Of these, approximately 40-45% were members of the Leiden congregation.

They decided to scuttle the second ship entirely and transfer all their goods and supplies to the Mayflower, making for very cramped quarters and a much less comfortable trip. After losing about forty days, the Mayflower finally set sail from Plymouth, England on September 16 (Gregorian calendar). The second half of the ocean voyage was very rough, having hit the severe northern Atlantic storm season, and piled yet more discomfort and trepidation upon the passengers. Imagine the battle these Pilgrims had with doubt and second thoughts, crammed together in a freezing ship tossed forth like a cork on the frigid seas.

After 66 long days, the sturdy ship arrived intact off the coast of America around November 21, 1620. During the long and fitful journey there was one death but also one birth. The colonists’ destination was the mouth of the Hudson River, part of Virginia at the time, but the captain first sighted land off the coast of Cape Cod. In the attempt to go south the elements were again against them, almost causing shipwreck. As if by divine hand they returned to Cape Cod and dropped anchor. With great courage and whatever stamina remained as the biting cold winds of winter descended upon them, parties were arranged to explore the land for a suitable settlement site. By the next summer, 50 of the original 102 passengers had perished, the majority over the harsh winter, and most of them from disease contracted during the voyage.

From these extremely difficult and humble beginnings Plymouth Colony was built upon the hope and grace of a committed people and the Lord Jesus. Having served as willing pioneers and taking the full brunt of the battle, many more parties were soon making the trip across the Atlantic and adding to the new colony. In time it became a routine crossing peopled primarily by English Puritans who began spreading out into the wilderness. In time the Separatist Pilgrims became greatly outnumbered, though their spiritual stand and way of life had a decided effect on later arrivals.

Posted on November 28, 2019, in Current Events and tagged America, Christian Persecution, Come Out From Among Them and Be Separate, Lord Jesus, Pilgrim Separatists, Spiritual Freedom, Spiritual Warfare, Thanksgiving, The Fight For Liberty, The Real chosen People. Bookmark the permalink. Leave a comment.