THE EMPIRE OF DARKNESS STRIKES BACK 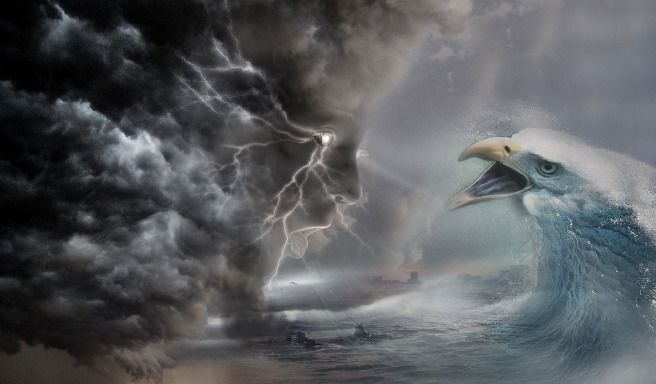 The Lord Jesus came to His people during a time of profound national darkness. There had been no prophetic word for over four centuries and the resultant void was filled by religious pretenders.

John the Immerser was an absolute phenomenon, a sensation. No one had carried such an anointing since the times of Elisha, the man who took the mantle from Elijah. One will notice, however, that though Elisha was given a double portion of Elijah’s powerful spiritual anointing, it was still Elijah’s spirit. These two men lived in the ninth century BC, and it was approximately a full 900 years from the beginning of Elijah’s ministry to that of John’s.

Malachi, the final Hebrew prophet before John, ceased his ministry in the late fifth century BC. This is what he wrote at the end of his book concerning John the Immerser:

“Behold, I am going to send you Elijah the prophet before the coming of the great and terrible day of the Lord. He will restore the hearts of the fathers to their children and the hearts of the children to their fathers, so that I will not come and smite the land with a curse.” [Malachi 4:5-6]

Those wise with understanding would have known that this personage who was to come would not be the actual man Elijah. The man himself mattered little in that he was but a vessel. It was the Spirit of God that rested upon Elijah. The great prophet is certainly to be commended for his magnificent discipleship, obedience, and determination, but he would be the first to tell you that the mantle (garment) upon him was the mantle of God.

I watched a preacher recently on video. I had never heard him preach before but his name was vaguely familiar. He was a veteran preacher, having already spent many years as a willing vessel. He was filled with the Holy Spirit. One night in prayer, the Lord suddenly spoke to him and said He was going to heal everybody in the church the next night. One obviously does not often hear that. The man believed it right off and began looking forward to the next night’s service with much expectancy.

The next day he started telling some members of his congregation what to expect. It would be a great night!  By the time the meeting began, however, all was dead. There was a heaviness. It felt empty. The man started wondering why but being a mature minister and knowing what he had heard the night before, he understood that darkness was fighting back. They all began to pray and worship. They fought through it. Later, when the time came for the healing service to begin, he had people line up in the main aisle. The first two in line were women who had been battling relatively severe health issues. The preacher thought, “Oh Lord, why couldn’t You have started this out with something easier?” But he got his little vial of anointing oil and began walking toward the steps of the platform to go down and begin praying for people.

However, something strange happened before he ever got there. He felt something on his back. He thought a fellow minister on the platform behind him had placed something upon him that felt like a coat. He wasn’t amused. He turned around but there was nobody there close enough. He felt his back and there was nothing there, at least nothing he could see. But he felt a tangible presence of something that could only be explained as the mantle of God.

While still on the platform he turned to the front to begin going down to pray for the people but before he got there (again), he saw that the first woman in line was already feeling the very powerful presence of the Lord! She had her hands up, her eyes closed, and was praying and worshipping. She suddenly began reacting to God’s presence all the more and before the preacher ever got to her or anointed her with oil she was instantly healed of her disease! Then the same thing happened to the next woman in line. And the next. Before the night was over everyone there who needed healing was supernaturally healed by the Spirit of God.

The Lord did exactly as He told the preacher He would do the night before. Darkness had tried to intervene but the people had stayed faithful. Darkness failed.

OUR FAITHFULNESS TO GOD

I’ve been around a while. I’ve seen a lot. I’ve experienced a lot. I could write a book on the personal miracles I’ve experienced in my life. It often starts with an internal spiritual desire, what some describe as a “burning.” It is something relating directly to the will of God. When a person catches ahold of that, and prays about it, and seeks the Lord about it, and is faithful to it, the desire grows. It is the Lord confirming that one is on the right track.

But then the enemy enters the picture and tries to mess it up. Spiritual warfare breaks out. There is a strong attempt to bring discouragement and a lack of energy. One has to fight through it. It takes time. Again, I could tell you stories. Determined as I was, and in great need of the miracle, there was no turning back. When you have a big fish on the line you may have to play him for a while. The time comes when you at last break through, defeat the enemy, and the very thing you prayed about, that which looked impossible in the beginning, actually comes to pass. This is what a spiritual fight and faithfulness can do. My life was changed for the better on several occasions through miraculous means. If I had not stayed faithful and determined to fight alongside the Lord the great victories would never have happened.

America is blowing up. Great evil has emerged. It is not unlike what happened in the first century AD. After 400 plus years of no prophetic word the nation of Israel continued to decline from within. Its spiritual weakness made it prone to attack from without and such attacks were often cakewalks for the enemy. What happened to the prophets? Why did the Lord stop sending prophets? I can answer that by asking the same question regarding America. We used to have a majority of solid Christian people and solid Christian leaders in this country. They knew the Word. Why? Because it was being taught seven days a week in some way or another. As time went on, however, the Christian strength of America continued a steady decline. Why? Because the solid Christians and Christian leaders began dying off and fading out, the latter largely through spiritual compromise. Then preachers began acting exactly like politicians in that their funding sources had to be protected at all costs. They began serving money rather than serving God. The Christians under these ministers never put up much of a fight and let them get away with it.

The enemy invaded the void. In ancient Israel’s time, the enemy that invaded the spiritual void included the religious leaders who eventually grew so demonic they sold out their country. They chose the rabid Zealots over the Lord Jesus and His followers.

These people you see in the streets today are much like the Zealots of old who were willing to destroy their own country in their effort to defeat Rome. Rome was never defeated by them but Israel ceased to exist forever. After they murdered the Lord things continued getting worse year by year until the final conflagration in AD 70. It was the result of rejecting love and peace and choosing instead ever greater amounts of hatred, bitterness, and anger until they were consumed by evil.

But the early Christians thrived. It was a spiritual war and the early believers won. The kingdom of the Lord Jesus continued to expand all across the world. At present there are a great many strong Spirit-filled Christians in America winning a spiritual war and the devil is striking back in any which way he can. He has many deceived people doing his work who care nothing for the Lord. This fight will grow much worse over the next few months.

“This is the judgment, that the Light has come into the world, and men loved the darkness rather than the Light, for their deeds were evil. For everyone who does evil hates the Light, and does not come to the Light for fear that his deeds will be exposed. But he who practices the truth comes to the Light, so that his deeds may be manifested as having been wrought in God.” [John 3:19-21][1]