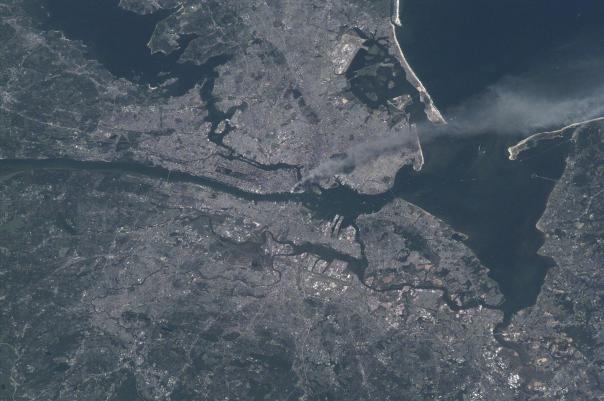 We talk about the brave firemen who climbed the stairs up to their deaths. They did not know they would die. There was no thought that the towers would come down. They were courageously doing their jobs to rescue people.

We talk about how our government protected us, but nobody did anything about three of the four planes. It was as if we had no defense against them. Jet fighters were scrambled too late. Despite a massive defensive infrastructure against such a possible attack, there was effectively no air defense at all. Most never thought Washington D.C. could ever be attacked by air, especially not the Pentagon. Surely, whoever or whatever came close would be intercepted or blown out of the sky.

But nothing happened. A plane flew directly into the north face of the North Tower of the World Trade Center at 8:46 AM. There was nothing to stop it. Nothing. There was a complete breakdown and failure to protect thousands of innocent people. Depending on the source, the initial two F-15 interceptors took off at the time the first strike occurred or minutes later. Then, incredulously, unbelievably, a second commercial airliner flew directly into the south face of the South Tower on live TV at 9:03 AM. Not only was the first plane not stopped, but the second plane also completed its mission completely unhindered seventeen minutes later.

One may think the first plane somehow got through in a surprise attack, because such had never happened before and no one expected it. But the second plane? On television? With everybody watching? By that time much of the country was aware of the incident and was monitoring the situation closely, watching a multitude of channels, listening to probably many more by radio, and communicating by telephone.

That’s how I found out. A friend called me on the phone. The first thing I thought was… How is this possible? It seemed otherworldly. The television commentators were somewhat subdued, speaking in low, even tones for the most part. I watched the towers burning, not sure how it was possible that this happened. Was there no effort to stop it?

Then I remembered a 60 minutes story I had seen sometime prior to 9/11 about the lax security at our airports. A man had repeatedly tested the system and discovered he could get almost anything through the checkpoints. It was simple for him. To bring any kind of contraband or worse on board a plane was relatively easy. It was so easy he was alarmed. He repeatedly told authorities what he had done on several occasions in a failed attempt to beef up security.

And nobody cared. No one listened. He was on 60 minutes talking about a major security breach at our national airports and couldn’t get to first base in his attempt to get anyone to do anything about it. Part of the reason was that it was the 1990’s. Our national mindset was on making money. The economy was cooking. We wanted nothing in the way to slow our efforts or stop the party. Lax security at our airports was one of the major symptoms that led to 9/11, but few ever talk about it…

Our air defense on that morning obviously failed, yet there are many conflicting reports that remain unanswered that have consequently spawned alternative theories. Did they get the call too late? Were hands tied because of innocents onboard? Did authorities hesitate? Look at the evidence. Even after the twin towers were attacked, one would think someone somewhere would have gotten the big idea.

Really? Maybe one plane. But two? Three? Over a period of 51 minutes? Then the fourth plane crashed in Pennsylvania at 10:03 AM (according to the 9/11 Commission), and the official story is that the terrorists on board were attacked by courageous passengers. This means there was still no effective response against even that plane an hour and seventeen minutes after the North Tower was struck.

Ask yourself a question: If I was on one of the doomed planes being held hostage by little men with box cutters, would I simply remain in my seat as I flew toward my certain death with no resistance whatsoever?

The terrorists were greatly outnumbered on each plane. Officially, all they had were box cutters for weapons. In reality, according to passenger reports and radio transmissions, they had knives and bombs. Did the passengers think they were merely being hijacked, would eventually land somewhere, and didn’t think their lives were in danger? Is that the explanation for their trusting and placid behavior? Just do what we say and nobody gets hurt?

Of course, the pilots must have resisted. There is no way they would give up their ships against little men with tiny knives. Did the passengers sit quietly because the pilots were already dead and no one else knew how to fly the plane? What if the pilots had been properly armed? If so, there was a great chance the attacks could have been prevented and thousands of lives could have been saved. But armed pilots were banned two months before 9/11.

Why was there no defense from any front inside or outside against the attack? Why were airline passengers left to fend for themselves? And why are there no voices against the extreme negligence of those who should have protected the country from irreparable harm on that day? Firemen ventured far up into doomed buildings to rescue people. Many others put their lives on the line. There are tales of great heroes who saved lives that morning. Did these not live out the great love spoken of by the Lord?

Despite remaining questions, today is a day to honor heroes. It marks a time of somber reflection on the unprecedented events of September 11, 2001. It is a day of remembering the many courageous and innocent people that were lost. But it is also a day of continuing to wonder how and why 9/11 ever happened in the first place, and why a far worse attack began shortly thereafter—the war against our American liberties and especially the dissolution of Fourth Amendment rights through ultra-surveillance and, ironically, such things as intrusive airport body scans and enhanced pat downs. What would George Washington, John Adams, and Thomas Jefferson think of such developments?

Was the aftermath of 9/11 a gross overreaction against sinister outside forces and governmental incompetence, or is there another explanation? One thing is certain. Ten years after, for some who’d love to change the world, certain people knew exactly what to do.